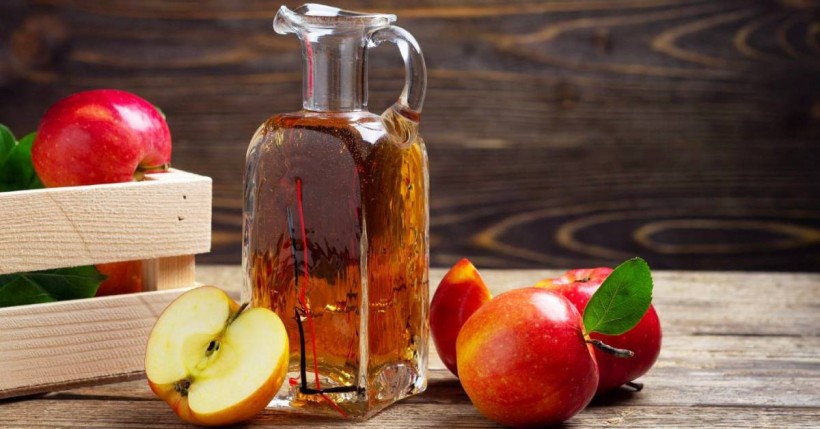 Highly praised as a cooking ingredient and as a medicine and preservative, apple cider vinegar got its name from French “vin aigre,” or sour wine. This is probably related to its strong taste, but apple vinegar is not sour,  on the contrary, is very healthy and you have probably heard about this beneficial substance if you are health conscious or searching for natural remedies on the net?

It is called panacea or cure-all for almost all health issues although it is not thoroughly researched.  So let’s see why apple cider vinegar has become a buzzword for health enthusiasts.

How It Is Made?

Apple cider vinegar is made from apples and apple juice.  When adding yeast into the apple juice, turns the sugar into alcohol, a process called fermentation. Actually, the active ingredient of apple cider vinegar is acetic acid, the byproduct that makes it acidic. It is made from apples with a fermentation process and it is a great folk remedy to explore.

It is a natural household cleaner and it is ethanol, its ingredient that makes him a chemical and effective cleaning agent in your household.

It is the “Mother” or the unfiltered apple vinegar, that contains proteins, enzymes, yeast, and friendly bacteria, that are said to be probiotics and give the apple vinegar the cloudy appearance and the darker look. Most of the apple cider vinegar is sold without the “mother” because of this cloudy appearance, which makes people think the vinegar is spoiled. On the contrary, this is the healthiest part of apple vinegar! Due to the high content of probiotics and good bacteria, it can boost your immune system. The “Mother” is also rich in enzymes that are essential for good digestion and breaking down foods and it is preferable as a drink to the filtered one.

Still, you can drink it both ways, depending on your preference.

It contains small amounts of minerals, and vitamins from the B group and vitamin C, amino acids, and antioxidants.  It is very low in calories as it is composed mainly of water; 5-6% of it is acetic acid and trace of some other acids such as malic acid, galic acid, ferulic acid and others. One spoon of vinegar can contain between 2 to 15 calories,   In the United States, the vinegar must contain at least 4 % acidity. (1)

How To Drink Apple Cider Vinegar?

It is not recommended to use it in high doses as there is a lot of acid in it. Therefore, it is not advisable to drink it straight as can cause some health problems and it should be always diluted in a glass of water. It can damage the tooth enamel and may upset your stomach or burn your throat.

The best way is to use apple cider vinegar in your cooking and as an addition to your salads and salad dressings.

Apple cider gummies are dietary supplements that are popular as they are delicious and do not have a harsh and strong vinegar taste.

Apple vinegar (AV) has been proclaimed to have different health benefits, such as weight loss, the ability to lower blood glucose levels, and reducing the risk of heart diseases.

One other overall study both on humans and animals proved that there may be evidence of beneficial health effects from the intake of apple cider vinegar, but further long–term studies are needed to make some final decisions. (3)

One of the benefits of apple cider gummies is from the vitamins that are added as supplements that can boost your energy.

So, if you want to reap all the benefits from apple vinegar it is better to consume liquid apple vinegar than to take apple cider vinegar gummies that are proven as not beneficial for your health.

It was Hippocrates, the father of modern medicine,  (460-377 BC), who recommended the use of apple cider vinegar for healing wounds, and ulcers. One other popular medicine, used in ancient times, a mixture of honey and vinegar was prescribed by Hippocrates and it is even prescribed by doctors in modern times due to its antimicrobial and antioxidant effects.

It is believed and scientifically  backed up by several clinal trials that it has several health benefits including:

One of the most important benefits of apple vinegar is helping in the treatment of diabetes 2. Several clinical trials supported the fact that apple vinegar reduces blood sugar and improves insulin sensitivity.

A small study suggests vinegar may improve insulin sensitivity by 19–34% during a high-carb meal and significantly lower blood sugar and insulin response. (7)

In a small study of 5 healthy people, vinegar reduced blood sugar by 31.4% after eating 50 grams of white bread. (8)

Vinegar can help kill pathogens, including bacteria.  As mentioned, it was used for healing wounds even in Ancient times. It is also a very effective preservative used in cooking to prevent spoiling food and it is all-natural and better than most artificial preservatives.  (9)

Still, additional clinical trials are needed to support it as an alternative therapy.

It can promote the feeling of fulness as shown in several clinical trials. For example, in one study in which 175 obese people drank vinegar with a meal high in carbohydrates, and eat less throughout the rest of the day.  (10)

This is the recommended daily dose, so if you like to take apple cider vinegar, you should take 1 to 2 tablespoons before a meal or with meals. This is the usual amount most people consume, but you should never exceed the amount of two tablespoons per day.

As mentioned above, apple cider vinegar is popular for its benefits in promoting weight loss.

This diet recommends taking 1 to 2 tablespoons of apple cider vinegar (15 – 20 ml) on a daily basis so you can reap all the benefits from it. It is preferable to take this dose before or with meals.

Taken undiluted, it may cause a burning sensation to your mouth and provoke vomiting and nausea.

If taken straight it may cause decay of the enamel of the tooth and upset your stomach. Moreover, it lowers the potassium levels and changes the insulin levels in the blood, so you should consult your doctor if you take any medications, (such as diuretics for high blood pressure or you have diabetes).

One of the best ways to use it is by including it in the meat marinades and salad dressing as often as you can.

Who Should Not Do This Diet?

It worsens the symptoms of people with a chronic health condition called gastroparesis (the stomach’s motility is slowed down and the stomach cannot empty properly).

People who suffer from histamine intolerance (people with a high level of histamine), should not consume fermented foods rich in histamine, among others, apple cider vinegar.

If you have an itchy scalp or hair apple cider vinegar may be the solution to your problems.

Why apple cider vinegar is good for your hair?

It contains acetic acid in large amounts and is known as an acid substance. If your hair looks fragile, dull, and is easily breakable is probably alkaline (higher on the PH scale).  Apple cider vinegar helps by lowering the PH level and bringing back the balance.

It is also rich in B vitamins and vitamin C which are good for your hair as they boost its growth and promote collagen formation that prevents aging. It has many antimicrobial properties that can help you fight bacteria and fungi that lead to minor infections and itchiness.

The ideal balance of the PH level of hair is between 4 and 5 and one study found that many commercial shampoos are alkaline and this provokes hair breakage, dryness, and friction. Apple vinegar, due to its acidity, supports the PH hair balance and makes the hair stronger, shinier and smoother, and can reduce dandruff. (12)

The anti-inflammatory and antimicrobial properties of apple cider vinegar are a powerful weapon against irritation and yeast that accumulates dead skin cells. We recommend you an apple cider vinegar wash that you can use to revive your dull hair and reduce scalp issues like dandruff.

How can you make apple cider vinegar wash?

Make a water solution of a couple of tablespoons of apple cider vinegar (3 – 4)  with 1 ¾ cups of water. You can also put 2 – 3 drops of lavender oil, but this is optional.

When you finish with the shampooing and conditioning, pour the mixture on your scalp and work into it for 1-2  minutes, before the final rinse.

This wash is safe for everyone, for all hair types, and even for colored hair.

Apple cider is not considered harmful, but you should consume it in moderation. As mentioned, it is not advisable to take the apple vinegar not diluted or if you have ulcers, as it is very acidic and can cause:

To reduce the risks related to apple cider vinegar you should: