5 Health Benefits Of Ginger And How To Make Ginger Ale

March 16, 2022 • By Penelope Torres
The estimated reading time is 9 minutes 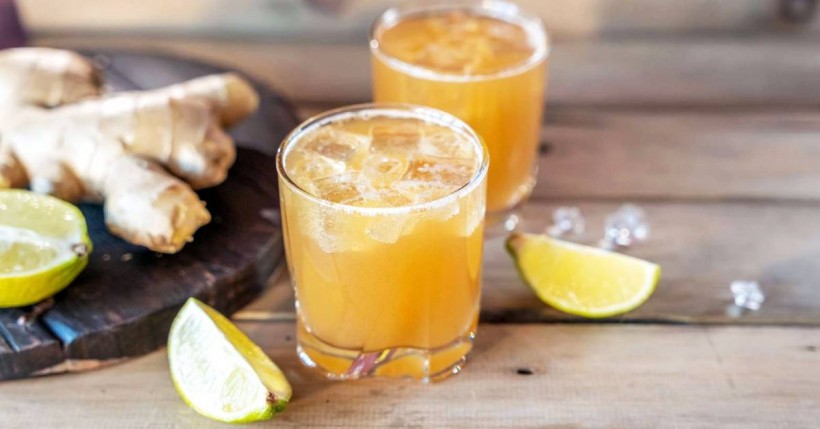 Besides being super delicious and adding a characteristic flavour to many dishes, ginger offers a variety of health benefits. Ginger (Zingiber officinale) is a plant belonging to the family Zingiberaceae and it originated in Southeast Asia. The root of this nutritious plant has been used as a spice in cooking and traditional health practices around the world for centuries.

Ginger is an inseparable part of many recipes. You can use it fresh, powdered, dried, or as juice or oil. Ginger has many health benefits, from treating nausea and promoting weight loss to aiding digestion and reducing inflammation.

So, in this article, we’re going to discuss the 5 most common ways consuming ginger can benefit your health as well as what foods can cause inflammation and what foods can help prevent or reduce this condition.

Consuming ginger can be effective in relieving symptoms of nausea (1).

One study has reported that ginger controls the severity of postoperative nausea and vomiting in patients having to undergo specific types of surgery (2,3).

Nevertheless, ginger seems to be the most effective in treating nausea in pregnancy.

One study tested the effect of ginger on nausea and vomiting in 1278 pregnant women. The results showed that ginger alleviated symptoms of nausea. However, it had minimal effect on vomiting episodes (4).

The term dysmenorrhea refers to the severe pain and cramps during your menstrual cycle.

One study has shown that ginger can decrease the severity of these symptoms. 150 women who had dysmenorrhea were included in the study and randomized into three groups. Women in the ginger group were given ginger powder capsules four times per day from the beginning of their menstrual cycle and they had to take them for three days. Women in the other two groups took ibuprofen or mefenamic acid capsules.

Feeling discomfort and persistent pain in the stomach are the most common symptoms of indigestion.

Delayed stomach emptying is thought to be the main cause of this condition. One study has reported that consuming ginger can help speed up gastric emptying and provoke contraction of the antrum in healthy people (6).

Then, another study tested the effect of ginger on dyspepsia (indigestion) in 11 people who had this condition. They were asked to ingest ginger capsules or placebo. An hour later, they were asked to eat soup. The results indicated that gastric emptying was faster in participants who ingested capsules containing ginger than in those who were given placebo, 12.3 minutes and 16.1 minutes respectively (7).

In addition, ginger has been used as home remedy for treating diarrhea, bloating, flatulence, constipation, nausea, and gastritis for centuries.

Many people drink ginger tea to ease symptoms of colds and flu and boost their immune system.

Ginger has anti-viral properties. One study found that fresh ginger was effective in inhibiting the formation of plaque caused by the human respiratory syncytial virus. However, dried ginger didn’t have this effect (8).

So, whenever you have a cold, make sure you include ginger in your diet to help you recover from it.

Studies have shown that ginger has anti-inflammatory and antioxidant properties. It can decrease pain in the muscles after intense physical activity (9,10). It may also slightly reduce symptoms of arthritis.

And here’s one simple recipe which contains ginger:

How To Make Ginger Ale

Now, let’s discuss what other foods, in addition to ginger, can help reduce or prevent inflammation-related pain.

Consuming anti-inflammatory foods is effective in alleviating symptoms of certain conditions, such as fibromyalgia and psoriatic and rheumatoid arthritis.

For example, one study says that certain compounds, such as omega-3 polyunsaturated fatty acids, flavonoids, curcuminoids, taurine, and the terumbone found in ginger, have anti-inflammatory activity. In addition, correctly consuming minerals plays an important role in decreasing pain  caused by inflammation (11).

Then, in another 2020 study, an anti-inflammatory diet was considered to help reduce pain in women having fibromyalgia syndrome (12).

There are many studies which reveal that consuming the wrong foods increases the risk of developing inflammation.

And as we already said, an anti-inflammatory diet can be helpful in preventing and reducing inflammation-related pain. So, let’s see what foods help prevent or reduce pain caused by inflammation.

All of these foods contain prebiotics, antioxidants, polyphenols, probiotics, and omega-3 fatty acids, which are all known to have anti-inflammatory properties.

Other anti-inflammatory compounds include:

2. Carotenoids. These compounds are found in tomatoes, carrots, peaches, squash, and watermelon.

3. Probiotics and prebiotics. These compounds are found in fermented vegetables and in drinks, such as kefir and yogurt.

4. These compounds are present in onions, apples, berries, coffee, cocoa, and tea.

Note: The Mediterranean diet is recommended as a type of diet that includes

all of the anti-inflammatory foods.

So, how can you change your diet?

If you want to eat a healthy, balanced diet that includes a variety of anti-inflammatory foods, you certainly need to cut down on some foods, incorporate healthy foods into your diet, and use different tactics when cooking.

Foods that you should cut down on include:

To eat a balanced diet, adopt new tactics when cooking, such as:

If you plan to make changes to your diet, we advise you to inform your doctor or a qualified nutritionist so that they can determine if these changes will benefit your health and won’t cause any problems.

And here’s one healthy recipe to start implementing changes in your diet:

Eating an anti-inflammatory diet plays a very important role in preventing or reducing inflammation. However, other factors should also be present when it comes to lowering the risk of developing inflammation. Those factors include:

Regularly doing physical exercises can fight inflammation too. When you exercise, relaxing chemicals are released in your body, which helps you feel less pain.

2. Having a good mental health

Reducing symptoms of depression and anxiety can help reduce inflammation. These two conditions have been related to pain as a result of the constant rumination about and focus on the pain that they can cause. Practising yoga and mindfulness meditation as well as doing breathing exercises can all help decrease chronic pain.

Overweight and obese people experience more inflammation-related pain than people that have a healthy weight since inflammation is strongly related to body fat.

So, including anti-inflammatory foods in your diet can be helpful in decreasing that pain.

Keeping your body hydrated can be helpful in reducing inflammation. Water helps your body get rid of toxins and it enables organs affected by inflammation to function properly.